Becky posted this quiz, and I thought it was cute. I don't think it really describes me, but maybe a little bit of the hidden me.

You're Chocolate.
You embody the perfect blend of sweetness and seduction. You personality is just as luscious and irresistible as chocolate ice cream. You have a flirty, melty attitude that's easygoing and delicious. You appreciate luxurious, extravagant things, like the way ultra-soft fabrics feel against your skin. Some people want to hog you all to themselves, but you find ways to make everyone feel special.

Once again, I have been mass posting. I have really cute pics from last week and this, so be sure to check them all out.

Laycee has officially said her first word. I mean, they both babble and they say mama and dada, but not specific. So, this is her first word that she says with meaning. 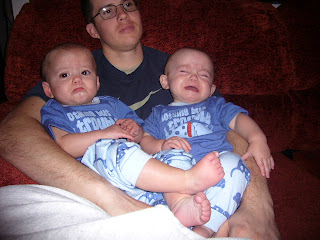 I am unable to find girl pajamas here, so when Dave went to the Air Force base, I asked him to pick up some for Laycee. He came home with a pair that Logan already had (thanks Dana) because that is all they had too. They were not happy about sharing.

Dave finally got to experience a little bit of my days. At lunch time, the babies kept crawling off me to go sit with Dave. I was happy for a litte freedom, but... 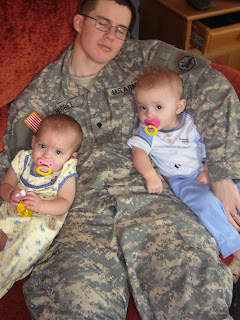 When he got home from work, he still didn't get a break. And the children doubled! Such is his life when he leaves for a month... he comes home to children who want his constant attention. 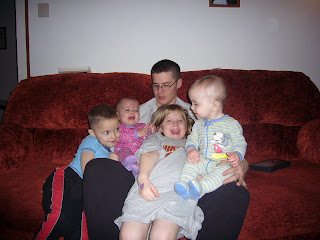 Laycee loves three things, carrying stuff around in her mouth like a lion (this just happens to be a dart and rather funny) 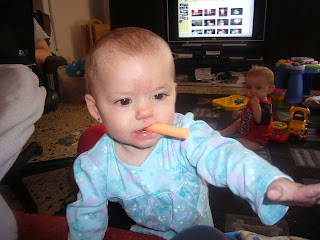 roar like a lion (sorry for the background noise)

And laugh at her daddy. 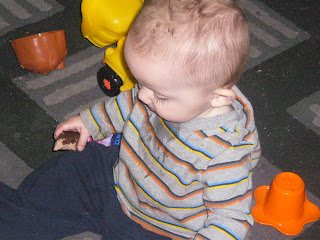 For their birthday, Laycee and Logan got a 3 musketeer (their first candy bar). It took 3 days for Logan to finish his, but boy did he love it!

On Saturday, we had a birthday party for the babies.
Birthday Boy and Girl

We played some games.

We ate cake and ice cream.

And we opened presents.

Thanks Nancy and Jaron 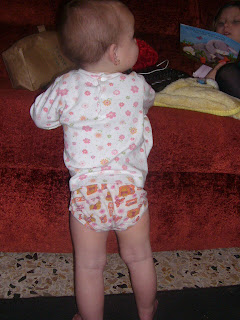 Laycee has another bad diaper rash, so the other day instead of putting her in a diaper, i was going to let it air out. Well, I didn't want her to run around completely naked, so I found some of Haylee's potty training panties. I can't believe how grown up Laycee looked in them! 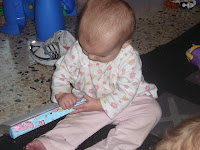 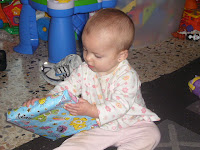 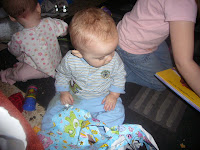 Colleen was not able to attend the babies birthday party on Saturday, but she was nice enough to drop off a little present for the babies. They were feel books and of course the babies are in love with them. Laycee has even learned to open the fold out pages and then turn the pages. 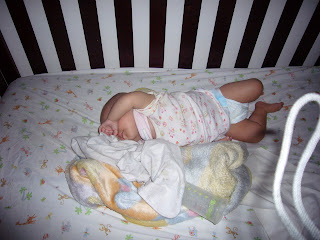 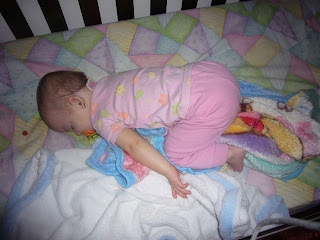 She looks so sweet when she sleeps.

This year for school, the kids made their own valentines. It makes it easier for them to write.
They were so excited to stamp and cut out. This was the finished product. 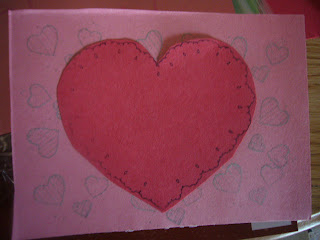 We were also very happy that Dave got home the night before Valentines day. He only had to work a half day on Valentines day too since he worked for 31 days straight. It was a great day filled with classroom visits and grocery store shopping and planning the babies birthday party. What more could I ask from my husband?

The babies had their year check-up today. As always, nothing is easy for them, but I am glad health care if free and that we have doctors who take good care of us. So here are the stats...

Logan is 28.2 in long (5%) and 18 lb 3 oz (below 5%). The doctor called him a failure to thrive baby because he stopped gaining weight. She has him seeing a nutritionist and starting on pediasure also. We are supposed to go back on Wednesday for some blood work and then she is going to decide is she wanted to test him for cystic fibrosis or not. I think he is just little like Trent, but looking at the charts, I can see her worry. He once again failed the developmental milestone survey she gave me (he fails every time). It is just a small screening to see if the child needs to see the early development people. But since he already sees them, she was not to worried.

Laycee is 28.4 in (10%) and also 18 lbs 3 oz (8%). She is progressing well, however she is not problem free. She also failed her milestone survery (I don't know what child passes lol) but once again, that is the least of her worries. For a while, we have been monitoring her cafe au lait spots (brown birthmarks). She was born with 2. Well at 9 months, she had 4 and now she has 7. Anything over 5 can be an indication of a neurological disorder. She also has a small nodule on her spine which is also an indicator. Anyway, she was supposed to have an eye test done in December, but they never called me. If she has the disorder, it will also show up in the eyes. But she isn't really due for the test until april. So, in April, I have to take her back to Germany because if they feel the need, they will also do another MRI, which is the only way to really determine if she has the disorder. Our post does not have MRI capabilities and it is not easy to do at the Italian hospital becasue they don't like to sedate children. So... looks like I will be visiting Germany again soon. If you want to read more about the disorder we are watching for.... here is a website. http://children.webmd.com/neurofibromatosis-type-1-nf-1 I think she is fine, but you can never be to careful.

None of their current problems are related to being born at 36 weeks or their hospitalization at 2 weeks. They were both cleared of that tramatic time. Their issues now are just part of being babies. Their development is just because Logan is slow and I like to do a lot for them because it is easier for me. And their other medical problems are just things that any baby could have. So, all in all, they are mostly healthy, there are just a few things that we are still monitoring for both of them.

Saturday we walked the 5 k race on post. Trent was pushed, but I was

so proud of Haylee because she really walked the whole thing.

I think next month, we might try it again.

On Sunday Haylee woke up and told me that her legs hurt so bad but she didn't know why.

Well we all know why, she walked/ran over 3 miles.

It really was a fun thing for us to do.

This is Haylee crossing the finish line.

Nancy is letting us borrow Jarons Jumperoo
and Logan LOVES it. 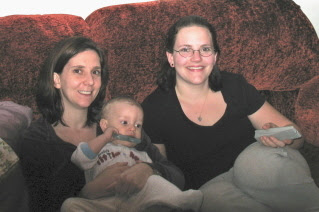 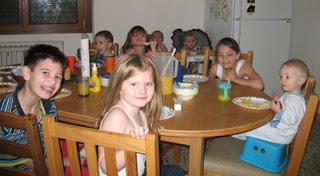 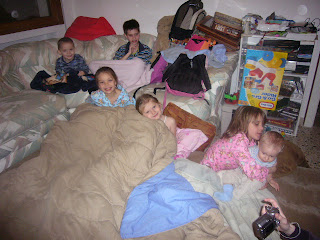 Julie asked me to watch her kids while
they went to Aviano for Taylor's
basketball game. And Nancy was bored,
so she came over and spent the night.
So we all had a friend.
Laycee, Logan and Jaron
Haylee, Charlie, and Jessie
Trent and Gavin
Lexi and Nancy 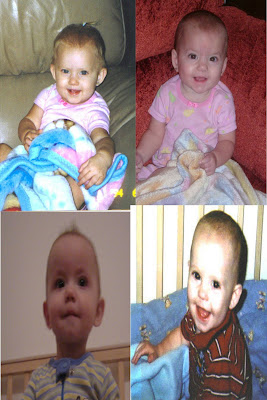 I get told all the time how much the babies look alike.
And then I get some people that tell me that
Laycee looks like Haylee
and Logan looks like Trent.
Well I was going through some old photos
and this is what I found lol 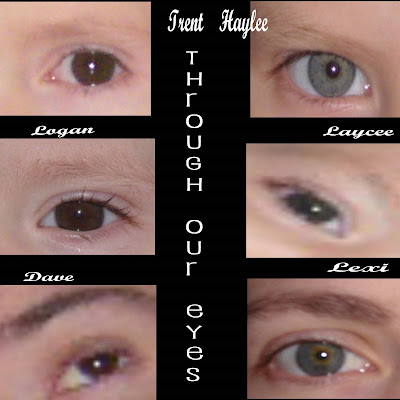 I was just feeling a little.... well I don't know,
But I hope you enjoy lol

I saw this rug on Joann.com and I love it!
I was reading the directions and if I can figure it out
I think I might try to make one.
Not these colors even though I love them
Because they don't match anything in my house,
but I absolutely LOVE this rug!
Check it out here!

Logan's hair is getting long on top,
so after his bath I was messing around with it
and I really liked it standing up.
So for church on Sunday,
We put in some gel and off he went
(excuse the goofy eye, he always blinks!) 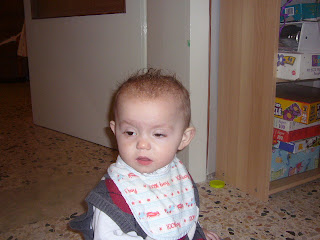 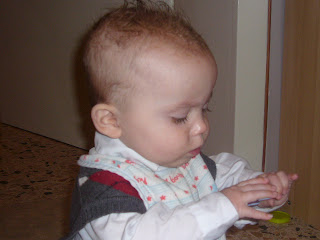 I have been taking some notes from Jessica's wonderful photography.
I was so excited how these turned out and Logan is just loving it.
He changed poses all by himself,
(well that might have been because he wanted out of bed) 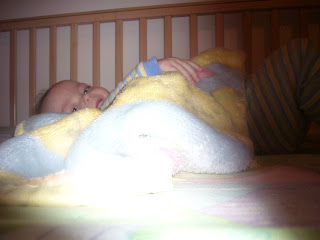 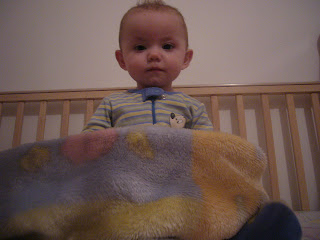 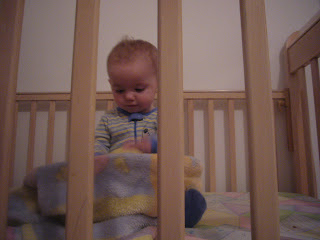 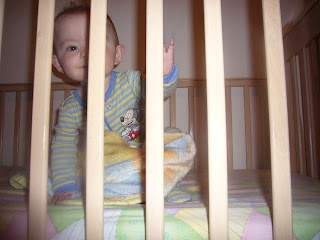 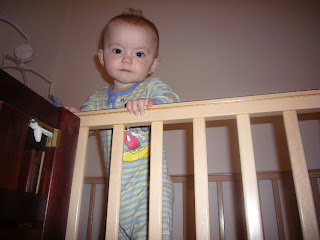 So I am a little slow here,
Life has been very busy,
So, here are pictures from the babies birthday

So after the babies chased Trent around the living room,
they decided they liked the whole chasing thing.
They got this dog for christmas and Haylee
wanted to see if she could pull it for them.
They both loved this idea.

Catch Me if You Can

I just thought this was so funny!