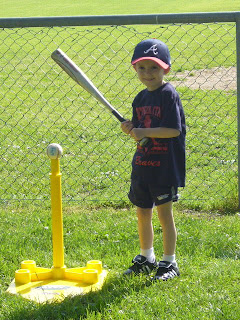 This is Trent picture. 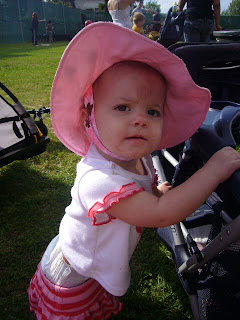 This is what Layce does. 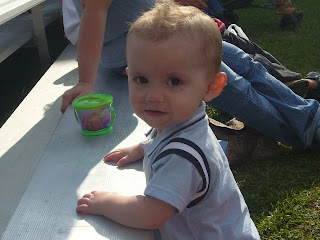 This is what Logan does.
Last week was pictuers, but I forgot to send the camera for Haylee. The babies hate the games, but they do like being outside in the sun! 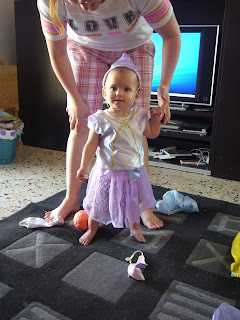 After cleaning the playroom last weekend, I cam across some of Haylee's old dress up clothes. So, Laycee got t play an she LOVED it. She wore this for the rest of the night and fussed when I took it off for bed. She is obsessed now with all of the headware Haylee has in her dressup clothes.
e

I want to apologize to all you out there who blog often and can't wait to see what new things your friends are posting. Or you lurkers out there, who I know read this. Anyway, it has been a busy week and I have not been blogging often. SORRY! And I wanted to say in advance that next week we are heading to Germany for Laycee to get an MRI and see the pediatric neuro doctor. So, we have not fallen off the planet, but we will be gone. Haylee and Trent are stayin behind this time, so when we get back, hopefully I will have pictures of the babies to share with you. In the mean time, my 30 days of mother stuff fell flat, but I have a few more things to post before we leave.

Okay, so here is Laycee trying to take off. She won't do it on her own yet, but if we help her get started she does fine. She is crying because she was mad that this was probably the 20th time we tried and she just wanted me to hold her lol, but maybe they will learn to walk after all. They are 15.5 months, but who cares when it happens as long as it happens right?

Well Dave thinks it is kind of lame, BUT, I felt like it was worth mentioning. Dave was promoted to Corporeal (or however you spell that). It is only a lateral promotion, so he is still E-4, but he is now an NCO (non commisioned officer). He is still one of the lowest enlisted in the office lol, but he is working up the ranks. He is hoping June or July to be promoted to Sargeant, but we will see how the points work out. He wants to be promoted by his 3 year mark.
So here is the military lesson. For promotion up to E-4, it is solely based on time in service and time in rank. There is a primary zone (where everyone gets promoted) and a secondary zone, where the command can push to get you promoted. Then for E-5 and E-6, you attend a board and then are promoted based on the cut off "points". The Army says we need x number of E-5. They go down the list from most to least and that is the cut off value. You get points from education, army training, awards ect. Dave has been short points since he went to the board, but this month he worked his butt off to try and get enough points based on the previous months. So.... we will see
But for now, I am proud of him for all he has accomplished.
So, this is my Day 9:
I am grateful for a husband who allows me the opportunity to be a stay at home mom so I can better appreciate my job as a mother and perfect it. I love being a stay at home mom, well most days, so this is day 9.

Day 8:
I love it when my kids make me laugh. Like this morning. Trent got up for school and got dressed. Here he is in the clothes he picked out. 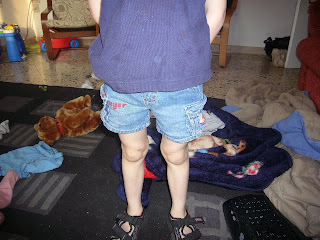 Yes I know he is skinny, but wait until you see what I am trying to show you! 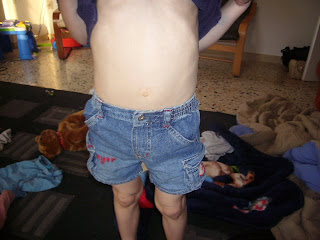 Yes, you guessed it. He put on Logan's shorts again! Only these are even smaller, and they fit!! Where does he find his wordrobe! 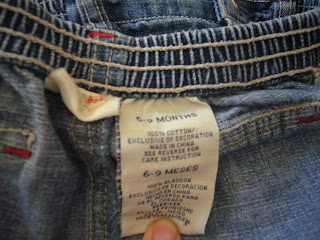 Anyway, that is just one of the examples of the way the kids make me laugh. They are so funny and constantly trying to make my life happier.

This post is all about Logan. He is generally not around when I take pics, so this one is just for him. He recently decided that food is good and he went from eating next to nothing to being such a pig! He steals Laycee's food... see the two bowls. The other night, he eat 3 helpins of mashed potatoes and then ate Laycee's bowl! 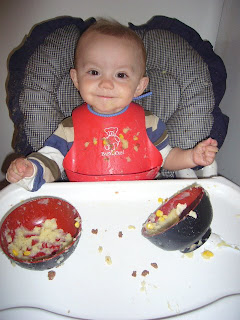 These are a couple pics of Logan doing his favorite thing. Playing ball. He says ball now and he is really good at throwing and catching. I hope to get video of that soon. 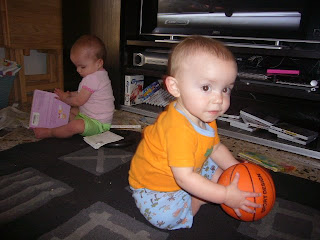 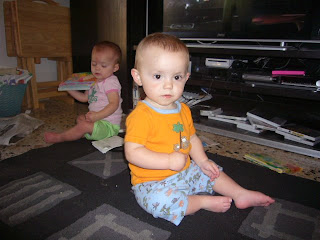 Edge of Winter by Luanne Rice

Edge of Winter is about a town who built history on a German Sumbarine sunk off their coast. A real estate mougle comes in and plans to dig up the submarine and take it to another state to make a museum. The book follows the memories of the war and relationships that were ruined as a result. But it is ultimately about the actions of a few teenagers who want to save the Snow Owls habitat.

I am generally a Luanne Rice fan, but this was not my top book for her. I am not much for reading about saving the animals or the horrible effects of war (Dave is in the army so I try to forget about that stuff lol). I thought the book had two amazing love stories and a great repair of family relationships but I felt like the story itself was kind of dull. I kept wanting to skip the story part and move onto the people part. If you are out of books to read, pick this up, but if you are not, choose a different Luanne Rice novel.

Day 7:
I love watching the kids do puzzles. It is one of my favorite past times. I find it so fascinating to watch how their little minds work and try and then try again. It is amazing! This puzzle here they are doing with Dave, but they do little kid puzzles a lot. They are working on 200 piece puzzles, but they need help with those. They are good at 100 piece puzzles though. Anyway, I love watching them do puzzles. 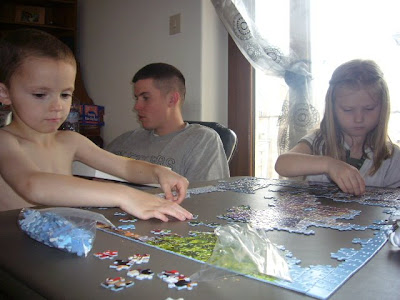 Logan and Laycee love the balcony these days, but I don't let them go out unattended. Anyway, I got these pictures, mostly of Logan, being curious about what was going on outside. 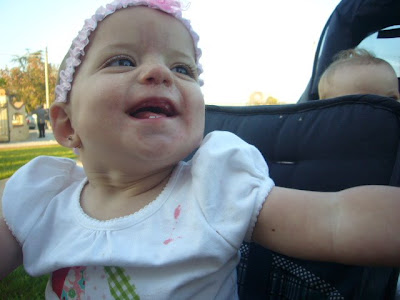 Laycee's teeth are growing in funny. I tried to get a good picture, but this is as good as it gets. Anyway, she is missing her two front teeth, but has the next two and then two molars coming in. She looks so funny close mouthed because her bottom teeth fill in the gap lol.

Day 5:
I love watching the kids read! I especially love it now that Haylee can read. There is little more satisfying than know that you are helping your children grow and learn. Even more so, I love that Haylee can now read the scriptures on her own. We each read one verse every night, and she can read most of the words. Trent has an amazing memory and can "read" almost any book we have already read to them. Laycee's favorite thing to do is to read, mostly feel books, but she loves all types. And Logan... well as you can see, he like to treat books like toys lol. 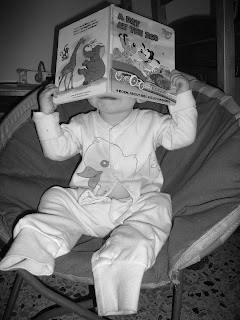 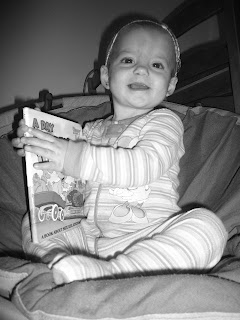 Day 6:
For day 6, I decided it was time to write one of the things I love about my mom. I love that my mom is constantly trying to better herself. She went back to college after she had all of us. And now, she is going back to college again. She reads a lot which set a great example. I especially appreciate how she is trying to better herself more now that we are all grown and almost gone.

Okay so I am a week late, but last week at church, I got a few cute photos. Laycee tried on Haylee's sunglasses. Doesn't she look like a rock star! 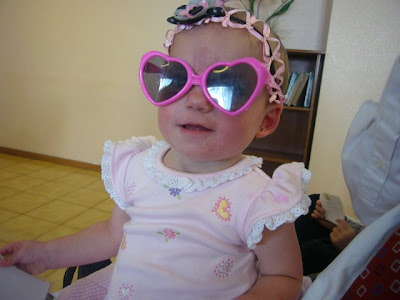 Some how Nancy and I were reading each others minds and dressed in the same clothes. We look like sister missionaries here lol. I LOVE IT! And this is taken in front of the church, which is in between what looks like two auto part stores lol. 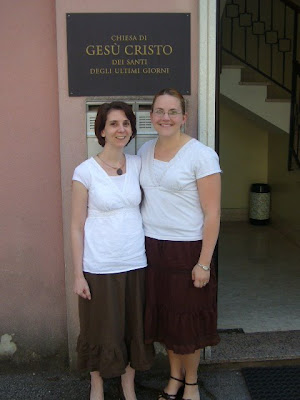 Moon Called
Blood Bound
Iron Kissed
Okay, so yes, The Twilight Series from a few months ago triggered my interest in books about the vampire/warewolf community. So, this is another series. The three books follow through the life of Mercy Thompson who is a mechanic with a lot of friends and also a Walker. She can take on coyote form, but she is the last one living. She lives next door to the head warewolf of the area, she is friends with a vampire, and comes in contact with a few witches and fae. I thought the book was rather fascinating becuase it is a spin on the lesser species winning as well as integration of the paranormal in the human world. I thought the first book was a little rough because Briggs starts telling the story without giving any background at all, but it all turns out okay in the end. If you just keep reading, you will find out everything you need to know and actually be so into the story that you no longer care. They are full of action and a very compelling love story. I definately recommend these for your next trip to the library.

Okay, so this month is Mothers Day Month, so I am attempting to make one post every day of some of the things i love about being a mother, or some things that I love about my mother. So, today is really the 4th, so I will include 4 things here and then write one each day from here on out... or try anyway.

My Number One Favorite thing about being a mother is watching the kids get along.

The sad thing about the military is that as summer approaches, friends always leave. In May, we have two great families leaving. So last Saturday, we went to a farewell for them. We barbequed, played volleyball, colored, chatted, and the kids went to a farm and took motorcycle rides. It was a great time and we are so sad to see Matt and Becky's Family, plus Tony and Colleen leave. Both of their families have been an amazing help to us. Tony delivered the twins and Colleen came over at least once a week for so long after they were born. Their sevice to our family has been invaluable. Matt and Becky have been great friends and definately who we hope to be like as we get older. We will really miss them!

Okay, so I am a little bit behind on my postings. So, here are pictures of last weekend. We attended a birthday party for Galen who turned 3.