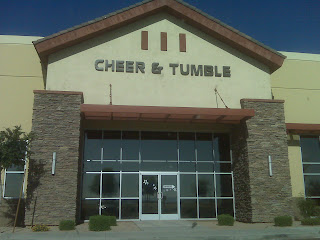 Haylee recently started a new activity. When we moved here, we debated about dance. She has been doing dance since she was 3. It was hard to "give" up a hobby she had been doing for 5 years and she was afraid to try something new. But I got to thinking about the future and I told her she might would like to try cheerleading so she could learn some skills to try out for the middle and high school teams. So, she said ok. She started the season in June. She is on their performing team here. They also have a competative team. Haylee has been really excited to learn tumbling and dancing. She is overwhelmed by how much they have to move to new positions during their dance though. I can't wait to post more pictures as the season progresses!